You are here: Home / Archives for soup

Some times you’re just in the mood for some good homemade Gazpacho. I love it when someone makes a special request for this dish. Here’s a few pictures of my favorite gazpacho recipe that I make quite frequently. 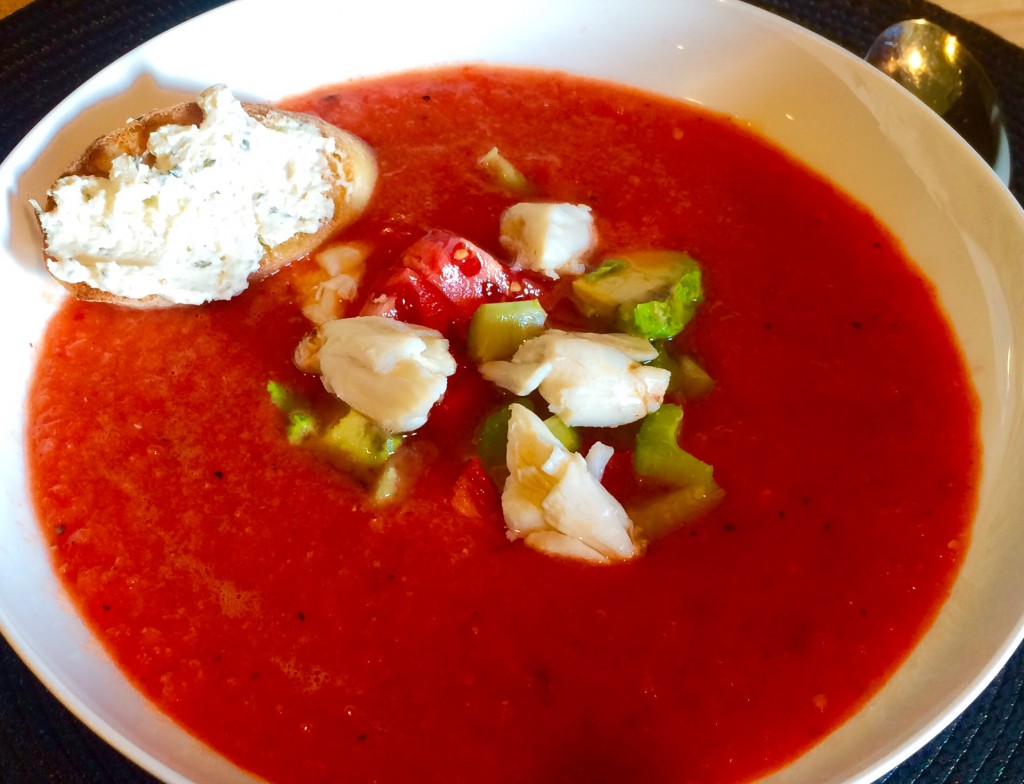 OMG!!! On a hot, sultry day in Mississippi, the last thing I want to do is turn on the stove. So I took the bounty I gathered from the garden and the farmer’s market and made the most flavorful chilled soup – Gazpacho. Juicy, succulent tomatoes, peaches in all their glory, crisp red bell peppers, fresh cucumbers all come together for a dancing delight on your taste-buds. 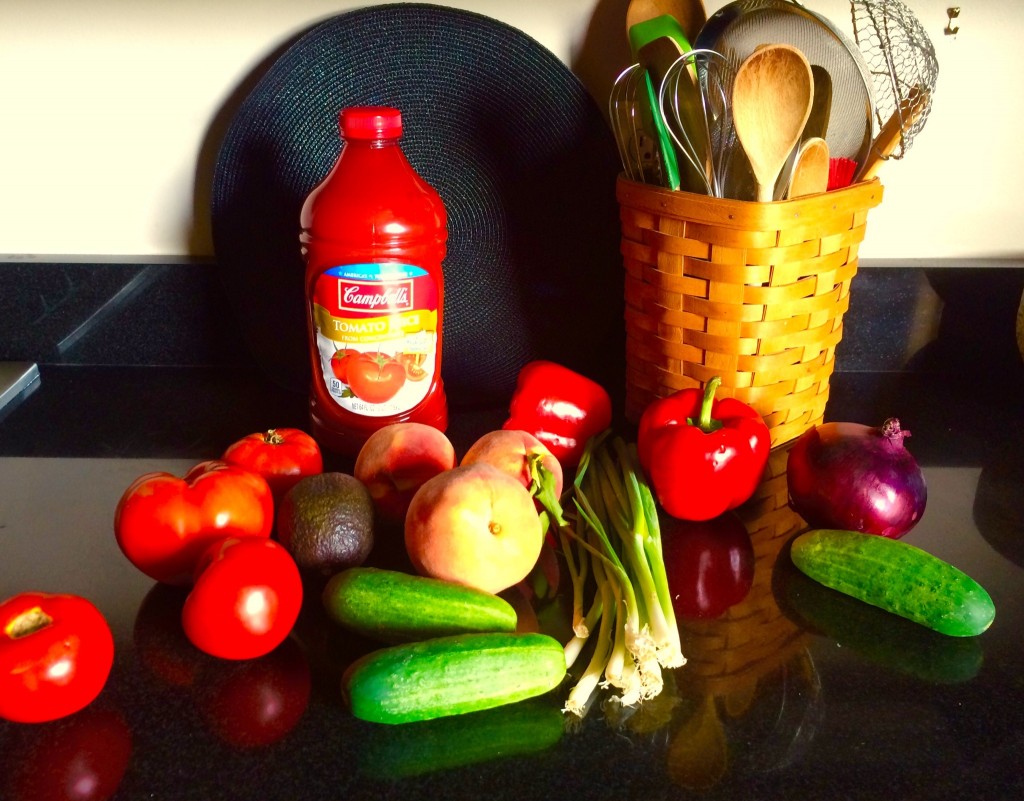 This gazpacho is a fabulous combination of spicy, sweet and savory. I love spicy but if you don’t, you can omit the red pepper flakes. I recommend letting this sit for at least 4 hours, and preferably overnight before serving. This infusing time will really make the soup sing. 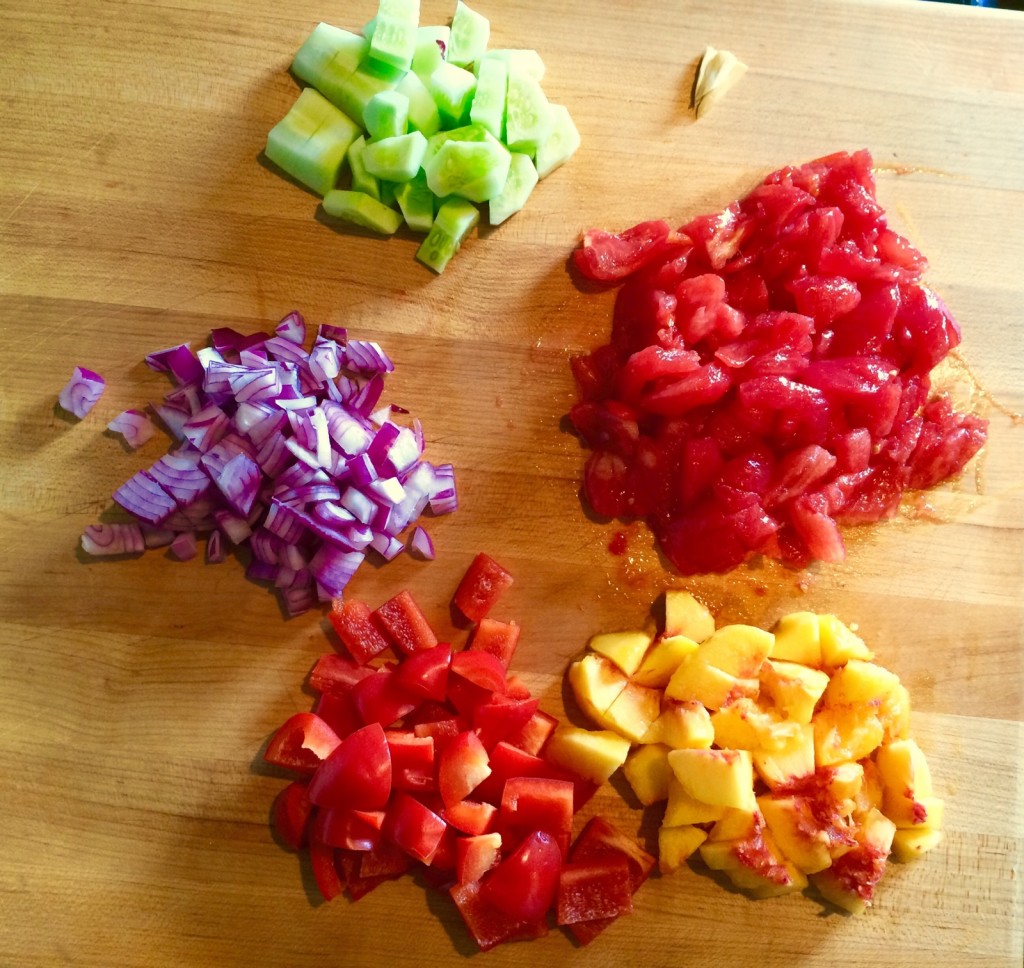 Several years ago, my other half and his father took a trip to Spain and Portugal. When he returned, all he could talk about was the cold soup and how he wanted me to learn to make it. After many, many attempts, I finally comprised a recipe that he said was better than what he had in Spain. 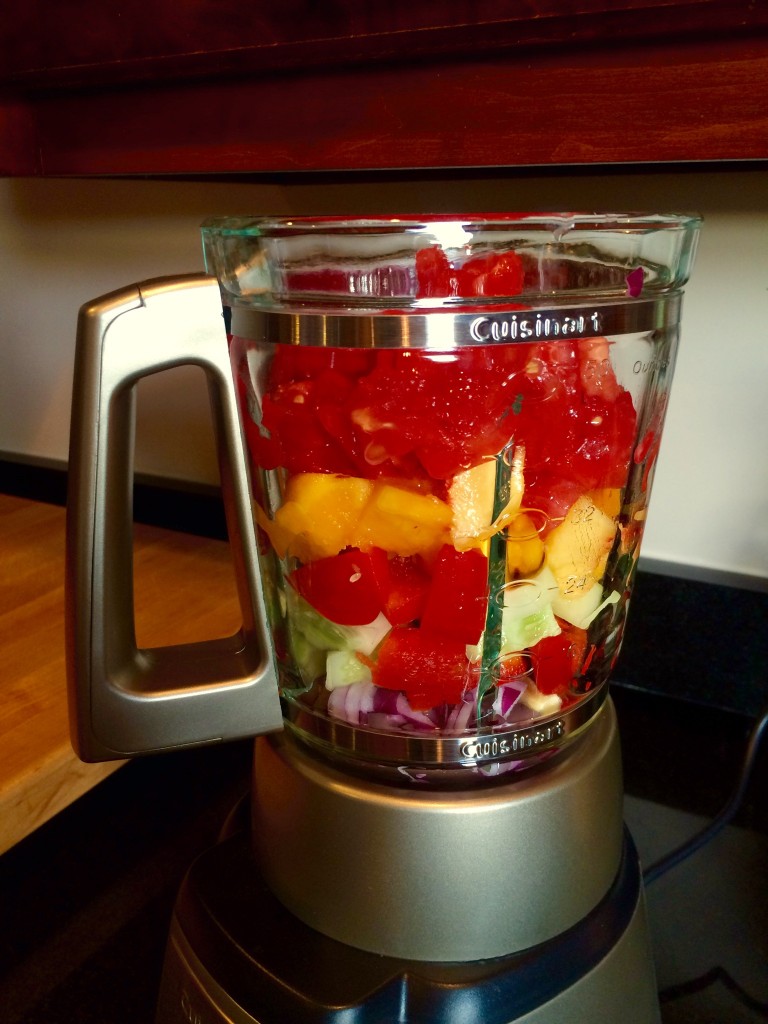 A form of gazpacho was made in the south dating back to 1824 with a recipe – From The Virginia House-Wife. “Making Gaspacha – Spanish”
“Put some soft biscuit or toasted bread in the bottom of a salad bowl, put in a layer of sliced tomatoes with the skin taken off, and one of sliced cucumbers, sprinkled with pepper, salt and chopped onions; do this until the bowl is full, stew some tomatoes quite soft, strain the juice, mix in some mustard and oil, and pour over it; make it two hours before it is eaten.” The salted tomatoes and cucumbers extracting juices that became soupy.

1. Make an X with a pairing knife on the bottom of the tomatoes and peaches. Drop the tomatoes into boiling water for 15 seconds, remove and transfer to an ice bath to allow to cool until able to handle, approximately 1 minute, the slip off their skins. Repeat process with peaches.
2. Cut the tomatoes in half crosswise and squeeze out the juice and seeds into a strainer over a bowl. Reserve the liquid and discard the seeds. Coarsely chop the tomatoes and peaches.
3. Place all ingredients for the gazpacho including reserved tomato liquid into a blender and blend until they are liquefied.
4. Cover and refrigerate gazpacho for at least 4 hours to overnight. the longer you let the gazpacho sit, the better it will taste. 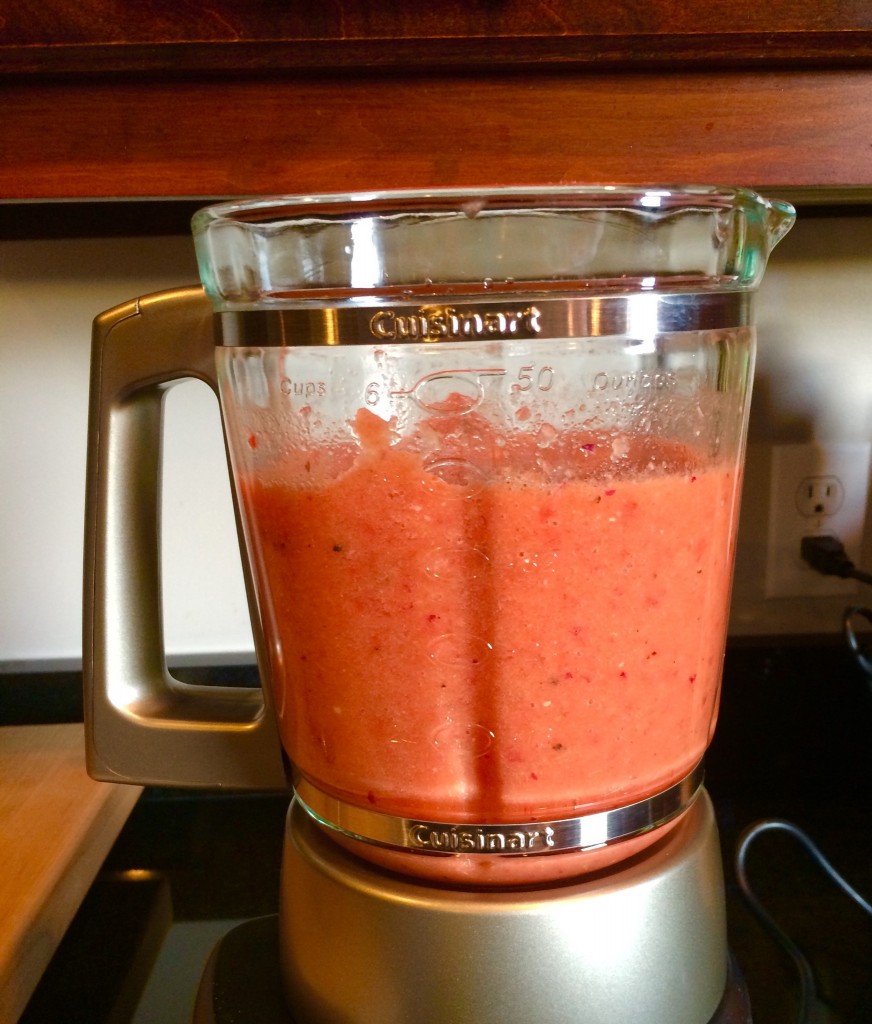 For the garnish: when you are ready to serve your gazpacho, dice all of your ingredients and place in individual bowls. Preheat the broiler and place the top rack 5 to 7 inches from the heat. Cut 6 (1/2-inch-thick) diagonal slices from the baguette. Place on a sheet pan, and brush with olive oil, and broil for 1 to 2 minutes on one side. Turn the slices, spread with the garlic and herb cheese, and broil for another minute, until the cheese is warm and the bread is toast 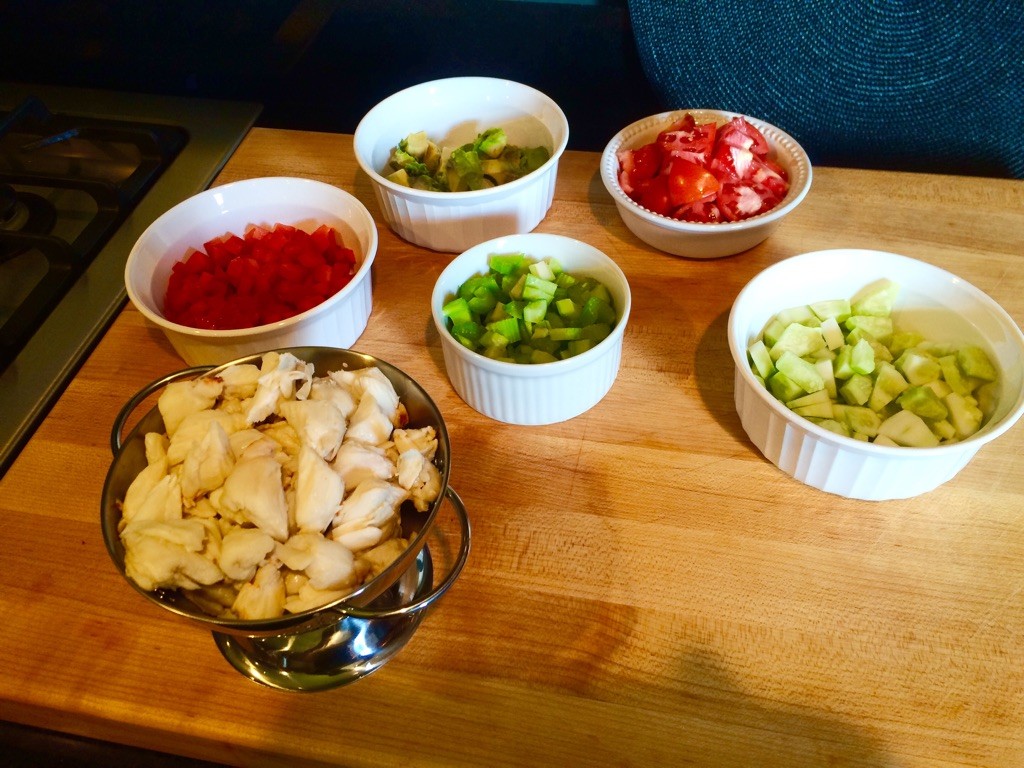 Set out the garnishes and pour the soup into a bowl and let each person garnish as desired. Serve with a warm cheese crouton.

If you aren’t a big fan of cold soup, make it into a salad – take 1 cup 1-inch square bread pieces that have been toasted, seeded and chopped tomato, peeled and chopped cucumber, chopped red bell pepper, 5 tablespoons red wine vinegar, 2 tablespoons finely chopped fresh flat-leaf parsley, 1 tablespoon finely chopped fresh basil, 2 cloves garlic, minced, 1/3 cup extra-virgin olive oil salt and pepper to taste. Toss all ingredients together and serve immediately. Can be made ahead of serving by omitting bread until ready to serve.

How about a Gazpacho Sandwich?

First you want to make a binder for the sandwich, such as feta, goat cheese, cream cheese, or any soft cheese of your choice.  Take 1/2 cup of cheese, 3 tablespoons extra-virgin olive oil, 2 tablespoons sherry or champagne vinegar, 2 teaspoons Dijon mustard, 1/4 teaspoon freshly ground black pepper and 1/4 teaspoon kosher salt.  Combine all ingredients in the bowl of a food processor and blend until smooth.  Ingredients for the sandwich include tomatoes, thinly sliced, 1 medium cucumber, peeled and sliced into thin strips, 1 red bell pepper, sliced into thin strips, arugula (optional), 1/4 teaspoon kosher salt and 1/4 teaspoon freshly ground black pepper.  Use a sturdy bread such as sourdough or country, toasted lightly.  Spread each slice of bread with some of the cheese spread.  Place a layer of tomatoes over half of the bread slices and sprinkle with half of the kosher salt.  Next, layer the cucumber over the tomatoes.  Scatter the peppers over the cucumbers; top with arugula, of using.  Sprinkle with remaining salt and black pepper.  Cover with another slice of bread.  Cut sandwich in half and serve.  Yield: 4 to 6 sandwiches (Sandwich recipe adapted from Giada DeLaurentiis recipe)